Mars Rover MIT Excel at World Meet in US 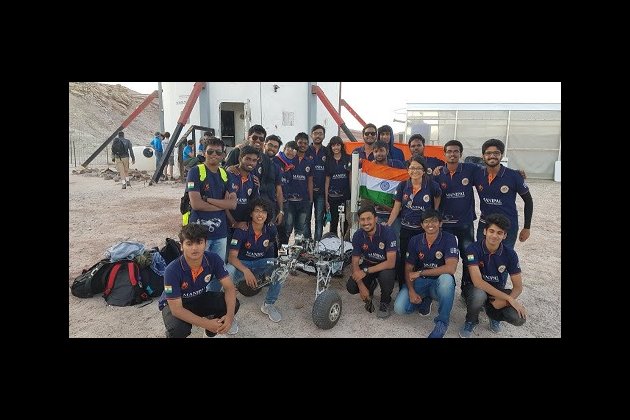 Manipal (Karnataka) [India] June 12 (ANI/NewsVoir): Mars Rover Manipal, the student rover design team from Manipal Institute of Technology blazed a glorious trail at the 13thedition of University Rover Challenge held in Utah in the US from May 30 to June 1, 2019.

MRM, Manipal Academy of Higher Education's official team powered by Mouser Electronics and Echjay Industries was the winner among the Asian challengers and finished 8th globally out of the 84 teams that participated. MRM also won the Barainca award for the best Science team in the competition.

For the fourth consecutive year, MRM has been amongst the top 36 international teams and was one of the only 5 teams from India to make it to the final stage of URC' 19 at the Mars Desert Research System along with IIT Bombay, IIT Madras, VIT Vellore and SRM.

University Rover Challenge (URC) is the world's premier robotics competition for undergraduate students. Held in the desert of southern Utah, URC challenges interdisciplinary student teams to design and build the next generation of Mars Rovers.

These rovers are designed to be capable of traversing and performing tasks on Mar's simulated terrain, in goals of aiding human exploration of the red planet. The competition requires participants to complete 4 missions - the Science Mission, the Autonomous Traversal mission, the Extreme Retrieval and Delivery mission and the Equipment Servicing mission.

"It was a wonderful experience of leading a team in an international competition. It was great to see the hard work by the team members has brought success. We got to learn many things and just wanted to make everyone proud. The feeling of representing the institute and country cannot be expressed," said Safal Ajmera.

"The team has been remarkable at work since the start. It has been a wonderful experience during the competition, lots to learn and showcase. At the end, we just wanted our well-wishers to be proud of everything we did," remarked the other leader of the team, V. Sai Shyam.

BEIJING, June 5 (Xinhua) -- Beijing will lower its emergency response to the novel coronavirus epidemic from the second level ...

75% of consumers in UK, Australia and U.S. slam Chinese government

LONDON, UK - More than 75% of consumers in the UK, US and Australia blame the Chinese government for the ...

JERUSALEM - The only Palestinian industrial area in East Jerusalem is to be demolished, and the present occupiers of the ...

CHRISTCHURCH, New Zealand - New public housing that will save tenants money in energy bills, and provide warmer, healthier and ...

ROME, Italy - Global food commodity prices fell for the fourth consecutive month in May as the coronavirus (COVID-19) epidemic ...

SYDNEY, Australia - Stocks in Asia advanced on Thursday but gains were limited, and not universal.China's Shanghai Composite finished flat.The ...