The world has a hard time trusting China. But does it really care? 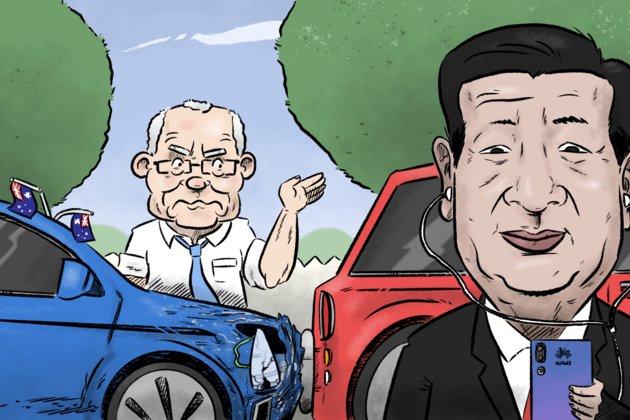 As China grows more powerful and influential, our New Superpower series looks at what this means for the world - how China maintains its power, how it wields its power and how its power might be threatened. Read the rest of the series here.

One of the earliest guests I had on The Little Red Podcast, the podcast I co-host with former China correspondent Louisa Lim, said something that stuck with me about the view of China in the rest of the world. John Fitzgerald, a well-known historian of China's diaspora, confidently declared that the Chinese Communist Party (CCP) "couldn't care less" about what non-Chinese Australians thought of it and its actions.

Looking through the results of the recent Lowy Institute Poll on Australians' attitudes toward China, this is probably a good thing for the party.

The Australian public's confidence in China's ability to act as a responsible power has fallen off a cliff. In just one year, it dropped from more than half of Australians to just 32%. That's a dire number.

That wasn't the only surprise in the poll. Four-fifths of respondents agreed with the proposition "China's infrastructure investment projects across Asia are part of China's plans for regional domination", and 73% believed Australia should try to prevent China from expanding its influence in the Pacific.

The poll was released in late June, at a time when China's image was taking a hit internationally. Millions of people took to the streets in Hong Kong to protest a now-defeated extradition bill that could have seen Hong Kong residents sent to China on suspicion of crimes.

Then came news in Australia that the wife of an Australian writer who has been detained since January was herself interrogated by Chinese officials and blocked from leaving the country.

Even for a country that purportedly doesn't care what the rest of the world thinks, trust is hard to come by these days.

A matter of trust

It's not entirely clear why so many Australians now distrust the Chinese state to the point where they believe our government should actively counter it (although perhaps not go to war with it).

There's little evidence to suggest that one issue alone has caused this sharp decline in trust. For instance, the Communist Party's most egregious recent violation of human rights, the detention of up to 1.5 million Uyghurs simply for being, well, Uyghurs has touched relatively few Australians.

Nor has the Australian government felt the need to act - it has said little on the matter.

Read more: Xi Jinping's grip on power is absolute, but there are new threats to his 'Chinese dream'

Rather, the decline in trust seems to be the result of an accumulation of negative news on China - some well-informed, some half-baked (such as the 60 Minutes expose on a Chinese "military base" in Vanuatu). And for some, it's based on personal experiences.

Last month, for instance, Australian National University revealed a massive data breach in the school's computer system, including tax file numbers, bank accounts and passport details. The sophistication of the attack, which came after multiple attempts, meant there was only possible one suspect, according to senior intelligence officials: China.

Stealing people's bank details might be profitable for the hacking team, but it doesn't win hearts and minds for the Chinese state. Actions like this do more to damage China's image than the words of noted China critics Clive Hamilton and Clive Palmer.

This sort of intimidation has been on the rise under Xi's leadership in recent years. Academics who are critical of China now expect to be targeted by the CCP.

A podcast like mine, banned in China, doesn't help. In the wake of an episode about China's real-time censorship of its own historical record, I was hit by a denial-of-service attack that our university's IT service struggled to fix. I gave up doing research inside China a while ago, after it became clear that my former colleagues and friends in rural China were increasingly at risk.

Even colleagues who have signed petitions calling on the Australian government take an evidence-based approach to China policy have been warned off continuing their in-country research by their Chinese research partners, ending collaborations which often stretched back decades.

To the outside world, this obsession with control looks like weakness rather than strength. A sanitised image of life inside China will do nothing to build trust in China as a responsible power.

So how does China go about winning back a 20-point drop in trust?

To answer this question, I have to borrow a famous line from the film, The Princess Bride:

When it comes to the concept of soft power, the Chinese state misses the basic point that it doesn't work particularly well. Money can't buy you love, or in Joseph Nye's terms, if your ideology and your culture have no appeal, cash won't fix that.

Yet, the Communist Party is now a firm believer in soft power, built around its confidence that China's ancient culture can return it to its legitimate status as the preeminent civilisation in the world. This confidence may be misplaced, as anyone who sat through the ponderous, state-backed, blockbuster film The Great Wall can testify.

To date, the target of China's soft power push appears to be a largely Chinese audience. The purpose of its designated soft power tools, from Confucius Institutes to the English-language news service CGTN, is to impress on both the domestic constituency and Chinese communities abroad that China now looks and acts like a rejuvenated great power.

Read more: Explainer: what are Confucius Institutes and do they teach Chinese propaganda?

This officially approved cultural soft power package might not sell to non-Chinese audiences in Australia or, well, anywhere. But China has recently been trying another tactic - economic soft power. This is specifically aimed at the developing world: China positions itself as a nation that overcame colonial oppression to emerge from grinding poverty and become an economic powerhouse.

Under former President Hu Jintao, the party tiptoed away from the notion that China would pursue a "peaceful rise", because they worried the word "rise" sounded threatening, even preceded by "peaceful."

Now, under Xi's watch, there is a new catchphrase to describe China's rise. Anchors on CGTN happily ask European and African interlocutors about the merits of "the China model" for economic development, in which the state acts as chess master, guiding the economy and society at every turn.

Some nations are buying into this. Last weekend, a taskforce of Solomon Islands MPs and bureaucrats presented their recommendation to parliament over whether to switch diplomatic recognition from Taiwan to China. While many Solomon Islanders, including Prime Minister Manasseh Sogavare, are reluctant to switch, the country's close economic ties with China make such a move feel inevitable.

A Chinese development model that promises an escape from poverty has appeal across the Pacific - and beyond.

Trust on both sides of the wall

Whether Beijing is able to turn around this trust problem depends, in part, on how much China begins to trust itself in the rest of the world.

Forthcoming research my ANU colleagues and I are conducting with Hong Kong-based researchers examines attempts by Chinese state actors to influence the 2019 Australian federal election.

Read more: With China's swift rise as naval power, Australia needs to rethink how it defends itself

Preliminary results indicate that the Communist Party didn't give a hoot which party won. The goal of Chinese propaganda during the election, rather, was to create a sense of distrust among Australian-Chinese communities by depicting Australia as a racist, unwelcoming place.

We should be mindful of attempts by elements of the Communist Party to influence our political processes. Yet it's crucial to remember the CCP targets many groups in Australia, including private businesses run by former Chinese citizens, religious groups and student organisations, not because they are all loyal party stooges, but because the party does not trust them.

The challenge for China, if it wants to be trusted by the rest of the world, is how to move beyond Mao Zedong's famous dictum:

This thinking should have no place in a globalised world, but in CCP circles, it's back in vogue.

The challenge for Australia's leaders is to recognise China's current political reality, but not be drawn into the same binary, simplistic thinking. There's enough of that going around.

Countries across the globe re-thinking reopening as coronavirus surges

As coronavirus cases around the world approach 11.5 million, governments are struggling with how to reopen their economies, leading some ...

North Dakota pipeline supported by Trump ordered to be closed

A U.S. federal judge ruled Monday that a controversial pipeline that runs through Native American lands in North Dakota be ...

Yair Netanyahu making name for himself at home and abroad

JERUSALEM - As scandal-plagued Prime Minister Benjamin Netanyahu stands trial for corruption, his 28-year-old son has emerged as a driving ...

WASHINGTON, DC - Broadway actor Nick Cordero, aged 41, has passed away after a long battle with coronavirus.According to Variety, ...

Vouchers instead of refunds in case of canceled flights disappoint

SYDNEY, Australia - Stocks were mixed in Asia on Tuesday.China's big run on Monday sapped its market, however the Shanghai ...

One of the lessons the current coronavirus pandemic has taught us is that we depend on electronic devices more than ...

Demand for oil may have peaked

PARIS, France - Although crude prices have rebounded from coronavirus crisis lows, oil executives and experts are starting to ask ...

Nationalism an earth-shattering trend in shaping economies of future

Former U.S. Treasury Secretary Lawrence Summers has recently conceded: "In general, economic thinking has privileged efficiency over resilience, and it ...