Sussexes Determined Not to Let British Tabloids Destroy Their Life 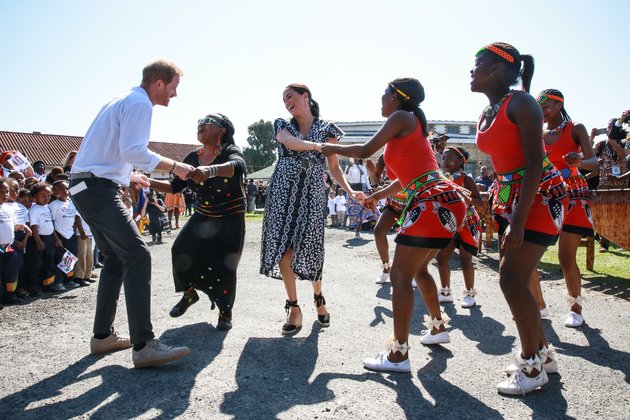 The Duke and the Duchess of Sussex said in a joint interview with ITV news filmed during their tour in Africa earlier this month and aired Sunday, that they would not let British tabloids destroy their life.

Prince Harry told ITV that most of what is published in the British tabloids is not true, adding "I will not be bullied into playing a game that killed my mum." Harry said the memory of Princess Diana's death was "still incredibly raw every single day and that is not me being paranoid..."

Prince Harry Walks Through Angola Mine Field, Echoing Diana The southern African nation hopes to be land mine-free by 2025, a goal of scores of countries around the world

The former U.S. television star Meghan Markle said that while her friends were happy for her when she met Harry, her British friends warned her not to marry Harry "because the British tabloids will destroy your life."

Speaking of how she can cope with such intense scrutiny, Meghan replied: "In all honesty I have said for a long time to H - that is what I call him - it's not enough to just survive something, that's not the point of life. You have got to thrive."

Earlier this month the couple sued British tabloid The Mail on Sunday for invasion of privacy, claiming it illegally published a letter she wrote to her father.

At the time, Harry said the treatment of Meghan was reminiscent of the tabloid's approach to his mother.

MINNEAPOLIS, Minnesota - A white police officer in the U.S. city of Minneapolis seen kneeling on the neck of a ...

Africa, then Asia to be invaded by locusts, says United Nations

NAIROBI, Kenya, May 29 (Xinhua) -- The Horn of Africa region will experience another swarm of locust invasion in June ...

Russia's most prominent conman left wave of death and deception

This is the story of how the mastermind behind MMM, Russia's biggest financial pyramid scheme, managed to get elected to ...

BEIJING, China May 29 (Xinhua) - A spokesperson for China's Ministry of National Defense on Friday criticized a report recently ...

TEHRAN (Tasnim) - The Atomic Energy Organization of Iran (AEOI) dismissed as "a futile attempt" the U.S.' new decision to ...

HANGZHOU, May 29 (Xinhua) -- AliExpress, a global online retail marketplace and part of Alibaba Group, announced on Thursday that ...

SYDNEY, NSW, Australia - Stocks in Asia skidded on Friday, and the U.S. dollar dived, as the relationship between the ...

PHENOM PENH, Cambodia - Scientists and environmentalists are urging an international moratorium on deep-sea mining after releasing a report indicating ...

NEW YORK, New York - U.S, stocks ran out of steam on Thursday with fears about the worsening U,S.-China relationship ...