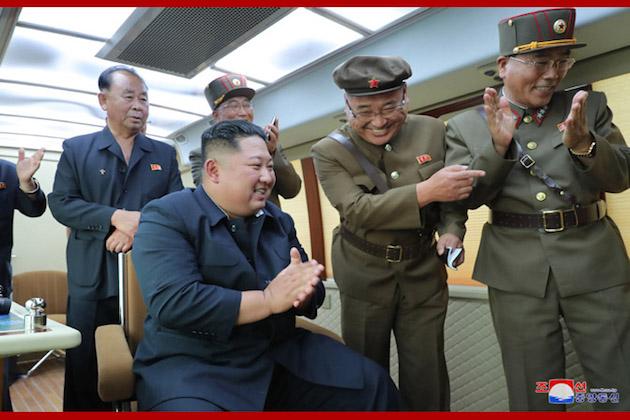 WASHINGTON, DC - Since the regime in Pyongyang doesn't see any reason to rein in its nuclear weapons program or to put the brakes on its ballistic missile technology efforts, North Korea possibly poses "the most pressing national security issue we face," a member of the Senate Foreign Relations Committee said late last week.

"Tearing up [the Iranian nuclear agreement] sends a signal" to North Korea's leader Kim Jong-un that the United States might not live up to its part of any future arrangement with Pyongyang, Sen. Chris Coons, (D-Del.) said while speaking at the Woodrow Wilson Center in Washington, D.C.

He said Kim and others in North Korea's leadership are well aware of "the Libya model," where Muammar Gaddafi, former leader of the nation, voluntarily ended his nuclear weapons program. A few years later was killed in a coup that toppled his regime and sent his country into years of civil war.

"Why would he choose to give up nuclear weapons" and risk his regime's existence, Coons asked rhetorically. Apparently, nothing is holding Kim back from resuming nuclear testing now. In the same way, North Korea continued ballistic missile testing following the two summit meetings with the United States, Coons said.

Adding to the tension is the most recent test, of a sea-based missile raising the threat of quick, surprise attack to South Korea and Japan to a higher level

Ukraine's post-nuclear experience, Coons said, provides Kim with another example of the dangers he could face if he turned over his nuclear stockpile for disposal. Kyiv turned over nuclear weapons the Soviet Union left behind after its collapse.

"Now it is a smaller nation and under assault by Russia," Coons said.

South Africa, Coons said, presents the only "generally positive" outcome when a nation gave up its nuclear weapons development program.

While giving President Donald Trump credit for attempting to negotiate an end to Pyongyang's nuclear weapons program and to denuclearize the peninsula, Coons said, "the framework [that came out of the discussions in 2018 in Singapore] was paper-thin" on meaningful steps to be taken by Kim in return for the end of economic sanctions.

Coons did acknowledge the return of remains from Americans killed in the Korean War as a positive outcome of the Singapore talks.

Thousands of Hong Kong residents told to stay in homes

PanARMENIAN.Net - Hong Kong's government declared its first lockdown on Saturday, ordering thousands of people to stay in their homes ...

As Trump said, Joe Biden is going to need a lot of luck

While Joe Biden's Presidency gives people a chance to rebuild, it also faces the bitterness and opposition of Trump's ever-loyal ...

Europe says it is ready for a new start with U.S.

NYC man accused of threatening to murder Representatives and Senators

NEW YORK CITY, New York - A New York City man who who stoked tensions before and after the storming ...

ALBUQUERQUE, New Mexico - Nearly 60 percent of residents rate Albuquerque's quality of life as excellent or good, according to ...

NEW YORK, New York - U.S. industrial stocks closed lower on Friday as fears of prolonged lockdowns due to the ...

SYDNEY, NSW, Australia - Stocks in Asia were sold off on Friday.All the major indices lost ground, while the rout ...

LIMERICK, Ireland - A boost for Ireland's expanding tech sector are plans by a giant telco supplier to recruit scores ...

The Thief of Bagdad