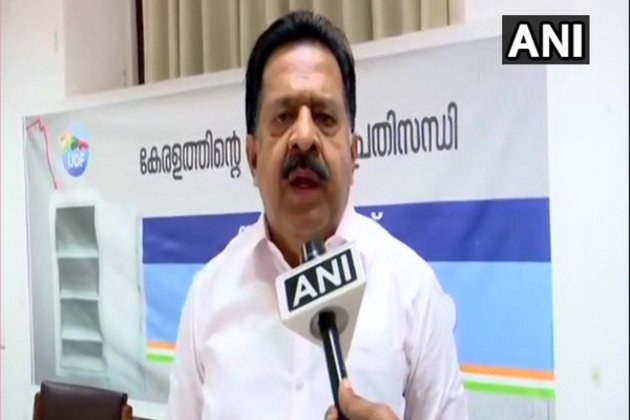 Thiruvananthapuram (Kerala) [India], Dec 13 (ANI): Leader of Opposition (LoP) in Kerala Assembly Ramesh Chennithala on Friday said he has decided to join the case against Citizenship Amendment Act which was filed by the Indian Union Muslim League (IUML) in the Supreme Court.

"I have decided to join the case in the Supreme Court because this (Citizenship Amendment Act) is a violation of the Constitution. People of Kerala are against it," Chennithala told ANI.

On Thursday, the IUML filed a petition in the top court on the question of the legality of Citizenship (Amendment) Bill, 2019, (CAB) which has been passed by both houses of Parliament and became an Act after President Ram Nath Kovind gave assent.

IUML, in its petition, requested the apex court to stay the Bill and its operation.

The Muslim League has also pleaded to declare it "illegal and void" for violating Article 14, 15 and 21 of the Constitution.

The Bill, which was passed by Rajya Sabha on Wednesday and Lok Sabha on Monday, faced its first legal challenge with the filing of the petition.

The passage of CAB has triggered widespread protests in the North-East, especially in Assam, where curfew has been imposed in some areas.

According to the Act, members of the Hindu, Christian, Sikh, Buddhist and Zoroastrian communities, who have come from Pakistan, Afghanistan, and Bangladesh till December 31, 2014, and were facing religious persecution there, will not be treated as illegal immigrants and granted Indian citizenship. (ANI)

Trump thinks 'it would be cool' to invade Venezuela

On Tuesday of this week, the U.S. Senate Foreign Relations Committee held a hearing on Venezuela. Appearing before the committee ...

11 arrests in Virginia and Maryland over shocking sexual exploitation

ALEXANDRIA, Virginia Eleven members or close associates of the infamous MS-13 gang were arrested this week and face numerous charges ...

Melissa Davey just a few days ago brought out her book on The Case of George Pell. Davey has followed ...

Seventeen dead, 123 injured as jet breaks in two on landing in India

DUBAI, UAE - An Air India Express flight from Dubai with 190 people on board skidded off a runway and ...

Beirut explosion may be turning point for Lebanon

DUSHANBE - Hundreds of fans have come to bid farewell to one of Tajikistan's most popular singers, Bahrom Ghafuri, who ...

PointsBet, a global sportsbook operator, and Kroenke Sports Entertainment, LLC announced Friday an entrance into a new, multi-year partnership. The ...

NEW YORK, New York - U.S stocks faltered on Friday despite better-than-expected jobs growth in July, and a rebound in ...

Switch is the latest data centre operator to post strong financial results as the global Covid-19 pandemic continues to fail ...

Asian markets topple over after Trump gets stuck into China again

SYDNEY, Australia - Stocks in Asia tanked on Friday as the U.S. took a big stick to China again, banning ...

A gunman with psychiatric problems took six people hostage at a bank in Le Havre, northern France, before giving himself ...

DUBLIN, Ireland - While its future on the other side of the Atlantic, and in the Pacific, is up in ...