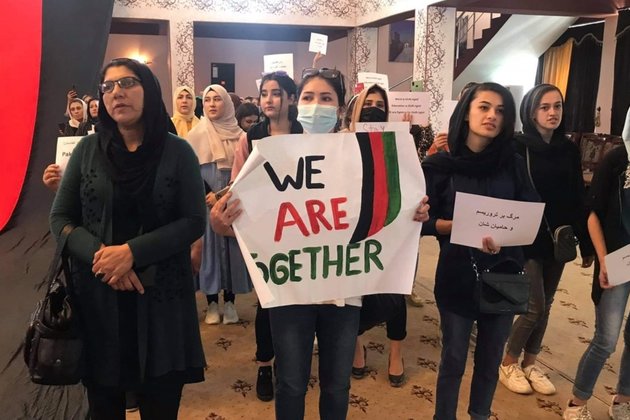 DUSHANBE -- Dozens of Afghan women residing in Tajikistan have rallied at Afghanistan's embassy in Dushanbe to protest against the erosion of human rights under the newly installed Taliban-led government and what they said was Pakistan's support of the militants.

The women chanted, 'Pakistan, go away from Afghanistan!,' 'Stop killing Afghans,' and, 'We support resistance,' among other slogans, as they gathered in front of the embassy on September 14, before entering the building.

The protesters told RFE/RL that they are concerned over Afghanistan's future and expressed hope that the resistance fighters led by Ahmad Masud in the country's north will be supported by other nations to battle against the Taliban.

Afghan Ambassador to Tajikistan Mohammad Zohir Akbar met with the protesting women and said he supported them, adding that the Taliban will be unable to maintain government structures.

After toppling the Western-backed government in Kabul a month ago, the hard-line Islamist group has told the world it has changed, including in its attitude toward women and girls. The group also promised inclusiveness and a general amnesty for former opponents.

But many Afghans remain deeply fearful, especially after the militants formed an all-male government led by hard-line Taliban veterans, banned protests, and cracked down on demonstrators and journalists.