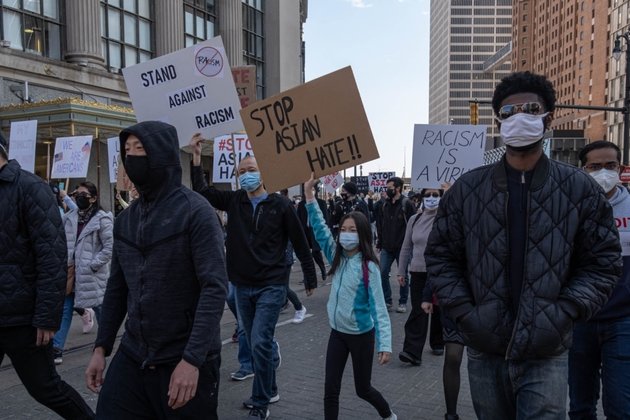 Washington - With hate crimes on the rise, U.S. federal prosecutors have charged more than 40 people with bias-motivated crimes since January 2021 and obtained more than 35 convictions, according to Justice Department.

The department released the figures Friday as it marked the first anniversary of the COVID-19 Hate Crimes Act and announced new measures to deter and combat hate crimes. The law required the Justice Department to speed up a review of hate crime cases.

"No one in this country should have to fear the threat of hate fueled violence," Attorney General Merrick Garland said in a statement. "The Justice Department will continue to use every resource at its disposal to confront unlawful acts of hate, and to hold accountable those who perpetrate them."

The number of hate crime prosecutions and convictions released by the Justice Department appears slightly higher than recent historical trends. A 2021 Bureau of Justice Statistics study found that federal prosecutors had charged an average of about 21 defendants and obtained an average of 19 hate crime convictions per year over a 15-year period.

Under the Trump administration, the Justice Department faced criticism for deprioritizing civil rights enforcement. Trump administration officials rebutted the charge, with the Justice Department's top civil rights official stating in January 2021 that his division had brought the highest number of hate crime charges during Trump's final year in office.

He did not provide a number.

A Justice Department spokesperson did not respond to a VOA request for figures on hate crime prosecutions during the Trump administration.

Federal law makes it a crime to target a victim because of their race, gender or gender identity, religion, disability, sexual orientation or ethnicity. Criminal offenses prosecuted as hate crimes range from acts of violence to damage to a religious property.

Most hate crimes are prosecuted at the state and local level, and federal prosecutors bring charges in exceptional circumstances. In fact, the vast majority of hate crime cases referred to the Justice Department do not get prosecuted.

There are several federal hate crime statutes, and they carry harsh penalties. But hate crimes are difficult to prosecute. To obtain a conviction, prosecutors must prove that the defendant was motivated by bias and not simply that the victim belonged to a protected class.

Last year, hate crimes in 37 major U.S. cities increased by nearly 39%, with attacks on Asian and Jewish Americans accounting for the bulk of the increase, according to police data compiled by the Center for the Study of Hate and Extremism at California State University, San Bernardino.

As part of its stepped-up efforts to combat hate crimes, the Justice Department said it is issuing new guidance with the health and human services department aimed at raising awareness of bias crimes; issuing grant solicitations for programs to create state-run hotlines; and hiring the department's first ever language access coordinator.

"Language access is a key barrier to the reporting of hate crimes, and the Language Access Coordinator will help improve knowledge, use, and expansion of the Department of Justice's language resources," the department said.

UK's Telegraph news block in Russia due to war coverage

MOSCOW, Russia: The UK newspaper, the Telegraph, has been blocked in Russia, following a request from the Russian prosecutor-general.The TASS ...

WASHINGTON, DC - U.S. President Joe Biden on Friday vowed to "do all in my power" to protect a woman's ...

PHNOM PENH, Cambodia: Cambodian villagers on the Mekong River have caught a stingray fish weighing 661 pounds, which is the ...

SYDNEY, NSW, Australia - Stocks in Asia rose on Tuesday after China announced it would halve quarantine from 14 days ...

LONDON, England: As prices in stores throughout Britain rise, British consumers shopped less in May and also expressed less confidence ...

As first in US, driverless taxis picking up customers in San Francisco

NEW YORK, New York - The euphoria on Wall Street of late last week was absent on Monday as all ...

WASHINGTON D.C.: In May, sales of new U.S. single-family homes unexpectedly increased, but this is expected to be temporary, as ...

LONDON, England: British Airways' staff at London's Heathrow airport has voted to strike due to pay disputes. Amidst an already ...

War for the Planet of the Apes