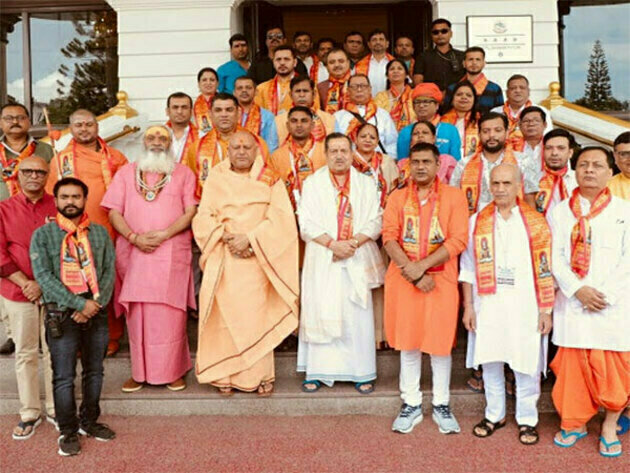 Kathmandu [Nepal], August 4 (ANI/NewsVoir): In its movement to visit sacred SHIVA temples globally, Pancham Dham Trust trustees, members and devotee groups with saints, scholars, social leaders, politicians, media professionals and other members visited Kathmandu, Nepal for darshan at Shree Pashupatinath temple on July 24-26, 2022. The group of about 60 devotees was led by Pancham Dham Trust chief mentor Dr Indresh Kumar, an RSS veteran who has mentored and been the torch bearer of the movement since conceptualisation and later its formal foundation in 2018. Dr Indresh Kumar has been a mentor of many global initiatives for peace and harmony.

On the movement, RSS veteran Dr Indresh Kumar said, "Thousand years ago, Adi Shankaracharya visited all corners of Bharat and he then established Mathas there. Today we know it as Char Dham. Likewise, Cambodia is blessed with the world's biggest Hindu temple of Lord Vishnu and thousands of Shivlingas since time immemorial. People there have been connecting here with religious belief and now they are looking forward to this place as Pancham Dham outside Bharat."

Dr Gopal Narayan Singh, founding trustee and chancellor of GNS University India is one of the force of the movement, who also promised to explore the possibility of a high-quality higher education institution in Nepal for research and education of Nepalese students primarily. Trust is looking forward to establish a world-class educational hub there.

Mahamandaleshwar Juna Akhara, Swami Yatindranand Giri Maharaj who has volunteered to the purpose of Pancham Dham in the north of India and Dandi Swami Anantanand Ji Saraswati, who also has devoted his life to the purpose and spread of Sanatan values in Purvanchal region, accompanied and led the religious faith of the group and conducted Pooja Sanskar at Pashupatinath temple in a most ancient way of Bharat and Nepal. One of the most sacred Hindu temples of Nepal - Pashupatinath Temple is located on both banks of the Bagmati River on the eastern outskirts of Kathmandu.

Before reaching Nepal, the Pancham Dham Trustees, saints and about 200 members visited Cambodia's Siem Reap and Angkor Wat temple in first week of June 2022 for the fifth-anniversary celebration of the Pancham Dham initiative and Pooja at the foundation of the proposed temple.

Pancham Dham is on a mission to revive the glory of Sanatana Dharma and bring people peace and harmony and make a bond amongst countries who have belief in the same philosophy. The identity of each culture and nation is supreme and efforts to create global peace with common values of Sanatan is the exertion made by Pancham Dham. During "sanatan sanskar mahotsav" on second Somvari many other groups based in India did their programs at Kathmandu on July 24 to 26.

Mahamandaleshwar Juna Akhara, Yatindranand Giri said the concept of Pancham Dham is like an ocean unfathomable and deep. So many rivers, water bodies may come to merge into it. Ocean never merges into anywhere. This samagam in Nepal proves itself. Arunachal Pradesh veteran politician and presently Chairman of AP forest council is the committed national executive member of Pancham Dham.

Pancham Dham is an international organisation to unfurl flag to create culture and religious awareness only. It is a religious, cultural and peace movement by group of people from Cambodia and India led by saints, social leaders, business leaders and professionals which is developing Pancham Dham temple in Siem Reap in Cambodia. Before going to sacred Shiva temples in Cambodia, Nepal and other countries, Pancham Dham team collected blessings from all four Dhams in India. The Santan values are spread in about 52 countries along the coastal nations in Asia, which are in plan to be visited over next few months to spread the message of religious and social peace and cultural harmony in the world which is affected by conflicts, war and terrorism.

The Pancham Dham movement respects the cultural identity and religious freedom of all cultures and nations and will have the utmost respect in this movement to peace and harmony. Few people and organisations have attempted to malign a very pious initiative and tried to connect it with the personal initiatives of a few groups 'Akhand Bharat' which is rejected in absolute. Pancham Dham has no connect and relations with such groups or people or organisations, any linking with Pancham Dham is wrong and misleading. The Pancham Dham trust stands on its mission and objectives and does not partner with any other organisation to its activities.

Dr Sailesh Lachu Hiranandani, founding Trustee and the man behind the Pancham Dham movement who has been visiting Siem reap Cambodia for about 20 years and invested time and effort to research about the place and its sacred importance, said, "When I observed holy river Kulin Devi flows uninterruptedly and nourishing sahastra Shivling over years of visit at the place, there was a divine force bringing everyone to the purpose and I was blessed to receive mentoring and support of Dr Indresh Kumar ji to the initiative. With the deep knowledge and insight of many saints and scholars, the initiatives reached to where it is today, thus we always commit to research and meditation centres in the countries we visit."

Dr Hiranandani also indicated to establish a Bharat Nepal fund to support the cultural and research and educational development of Nepal with its own value systems. He said that we welcome people of Nepal to come forward and establish themselves globally.

On the occasion, Prof Santishree Dhulipudi Pandit, the first woman Vice Chancellor of prestigious Jawaharlal Nehru University, New Delhi enlightened on the role of women in society and how women empowerment brings a change in society. Any world-class research and higher education development in Nepal is always a welcome step and Indian educational institutions will come forward to support the initiative.

According to its mission and commitments, the only extension to the religious confluence of Pancham Dham Trust will be its contributions in higher education, and cultural and meditation researches and activities of the country.

Pancham Dham team received immense support from Nepal in this visit. More than twenty House of Representatives and religious leaders came to meet Dr Indresh Kumar and discussed about the way forward and support to Pancham Dham organisation. These dignitaries echoed the support and welcomed the initiative contributions made by Pancham Dham Trust of Cambodia and India.

SYDNEY, NSW, Australia - Stocks in China were flat to lower on Tuesday as investors weighed up the disappointing economic ...

LONDON, England: Reports from the UK's opposition Labour Party said its leader, KeirStarmer, will call for a freeze on energy ...

NEW YORK, New York - U.S. stocks continued to mend fences on Monday, with gains by all the major indices."I ...

The Shape of Water