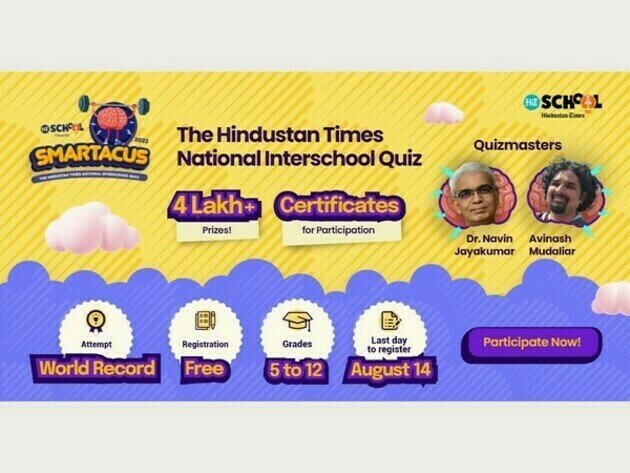 New Delhi [India], August 10 (ANI/PNN): The record-breaking success of ClassAct 2022, the Hindustan Times Republic Day Quiz, propelled HT School to take quizzing to the next level. With the aim of offering students an opportunity to engage in team quizzing, it has launched another thriller--Smartacus 2022, The Hindustan Times National Interschool Quiz. This interschool team quiz will allow students to bask in the quizzing limelight while representing their schools and states! The Selection round of this quiz will be conducted on August 15th.

From 2 PM-3 PM. "I'm looking forward to the ultimate battle of the brains in Smartacus 2022. These kids never fail to surprise me. The quiz is not all about learning by rote or memorizing facts, it's more a fun quiz that spans to traverse a wide range of topics from stars in the sky to YouTube stars. We want the kids to enjoy the experience," says Avinash Mudaliar, one of the quizmasters.

Dr Navin Jayakumar, who will host this quiz along with Mudaliar, is equally enthusiastic. "I am eager to meet India's best brains in Smartacus 2022. It's more a love for bubbling students with an appetite for knowledge, I suppose. I would encourage kids to look beyond what is presented to them, like newspaper headlines and school textbooks. Look, think, learn, and grow," says Dr. Jayakumar.

Registration for Smartacus 2022 is free,and students can register at https://htschool.hindustantimes.com/smartacus till midnight of August 14, 2022. The major draw is the prizes, the world record attempt, and the media coverage! There are Rs4 lakh+ worth prizes up for grabs, an enviable trophy for the winning school and loads of publicity. All contestants will also be rewarded with digital certificates of participation. HT School will be attempting a world record with Smartacus 2022, with multiple record books in attendance.

to 12. Children studying in Indian schools overseas are also eligible to participate. Participation for Smartacus 2022 will be spread across four zones--North, South, East, and West, with representation from all Indian States and Union Territories. The quiz will test budding quizzers on topics including history, geography, sports, language and literature, science, arts and entertainment, culture and lifestyle and general knowledge.

This national-level interschool quiz will be conducted over five rounds--Selection, Prelims, Semi-finals, Finals and the Quizzer of the Year. HT School will reward winners at each stage of the quiz.

The Selection round will be individual, wherein students of grades 5 to 12 will compete asynchronously on the Quizizz Platform. It will comprise 60 questions, including multiple-choice and type-in formats.

Out of the 64 schools battling it out in the Preliminary round, four (one from each zone) will make it to the Semi-finals. The Finale will see the top two schools vying for the champion's trophy and exciting prizes. The Finale will be followed by the Quizzer of the Year contest in which 20 students from the 4 Semi-finalist teams will compete for the most coveted award for quizzers. The Quizzer of the Year contest will take place asynchronously on the Quizizz Platform.

Smartacus 2022 is slated to be the biggest quiz of the year, as HT School celebrates 75 years of Indian independence in all grandeur.