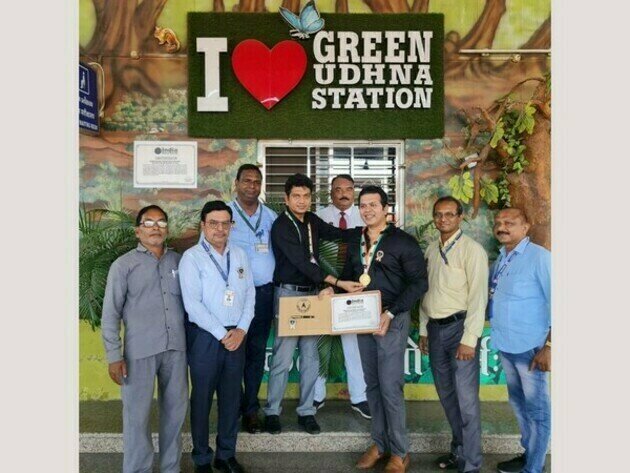 Surat (Gujarat) [India], August 10 (ANI/PNN): The Udhna Junction railway station in Surat has become the first railway station in the country to enter the India Book of Records as a 'Green Railway Station for eco-system restoration and climate action.

The Udhna Junction railway station is the first not only in India but across the world to gain the coveted place in the India Book of Records as the green railway station, which is working in the direction of climate action.

Thanks to Viral Desai, aka 'Green Man,' who adopted the Udhna Junction railway station through his non-governmental organisation (NGO) 'Hearts at Work Foundation' with the sole mission of giving it a 'green' makeover in 2019. Since then, a number of environmental conservation projects have been carried out at the Udhna railway station.

"This is a historic moment for us, and we are honoured that the India Book of Records has designated Udhna Railway Station as the Green Railway Station," said Viral Desai. "Since 2019, when the greening of the Udhna railway station began, it has piqued the interest of many international organisations."

At a time when Prime Minister Narendra Modi has been advocating for solid results in eco-system restoration and biodiversity conservation at various international forums, Udhna Railway Station's achievement is a source of great pride for Surat and the country, according to Desai.

"Udhna station, which was once unheard of, has now become a brand in the direction of cleanliness and environmental protection," said Dinesh Verma, station director of Surat Railway station. Hearts at Work Foundation and Viral Desai deserve full credit."

It is worth noting that the country's first Pulwama memorial is located at the Udhna railway station. The station also has a Sparrow-zone that can house over 400 sparrows. Aside from that, the station has over 50 unique paintings and a unique green gallery with figures to educate over 16,000 visitors on environmental protection.

"The first urban forest of Indian Railways has been created using the Miyawaki forest method at the Udhna railway station, which is dedicated to war martyrs," Desai said. "Shahid Smriti Van" is the name of this urban forest."