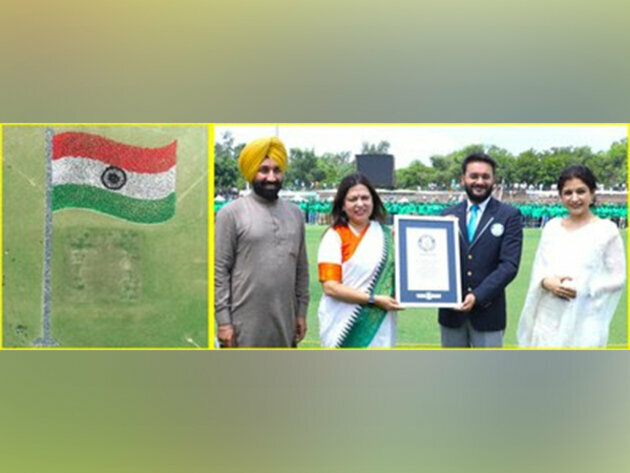 Chandigarh [India], August 13 (ANI/PRNewswire): Strengthening Prime Minister Narendra Modi's ongoing 'Har Ghar Tiranga' campaign and taking it to the international level to mark the 75th Independence Day of India, the NID Foundation and Chandigarh University on Saturday created the Guinness World Record for the formation of 'World's Largest Human Image of a Waving National Flag' when as many as 5885 students from Chandigarh University and other schools and colleges along with the volunteers of the NID Foundation of the UT and other dignitaries gathered for the flag formation at Chandigarh Cricket Stadium and created the history in the heart of the City Beautiful.

The event was aimed at strengthening the 'Har Ghar Tiranga' campaign envisioned by Prime Minister Narendra Modi as part of Azadi Ka Amrit Mahotsav to mark the 75 years of Independence of the country and take it to the international level via this world record. Besides igniting the spirit of patriotism and nationalism among the citizens of this great nation, the event will also prove to be a great milestone in achieving the Government of India's target of unfurling the tricolour atop 20 Crore houses.

The patriotic fervour and zest was visible in the air as more than 25 thousand people gathered at the Chandigarh Cricket stadium, where over 5885 young boys and girls formed the World's Largest Human Image of a Waving National Flag, thus creating a new Guinness World Record, amidst the loud chants and cheers from the gathering. Along with the students, Banwarilal Purohit, Smt Meenakshi Lekhi, S. Satnam Singh Sandhu, Dharam Pal and other dignitaries were also a part of the flag formation.

Swapnil Dangarikar, official Guinness World Records Adjudicator, who was present at the event verified the record. "The previous world record for the largest human image of a waving national flag achieved by GEMS Education in Abu Dhabi, UAE has been broken and a new world record has been created by NID Foundation and Chandigarh University in today's event," he confirmed.

UAE had achieved the record for the largest human image of a waving national flag with 4130 people, in 2017. However, India has broken the record comfortably, said the official.

Speaking on the occasion, Banwarilal Purohit said that with the successful creation of the world record formed by Chandigarh University and NID Foundation, Chandigarh has given a great message to the entire world, on the 75th anniversary of India's Independence Day.

"This event has become even greater than what I had imagined. I extend my heartfelt congratulation to Chandigarh University Chancellor and NID Foundation Chief Patron S. Satnam Singh Sandhu whose team has achieved this feat. Not only their institutions, but they have made the entire Chandigarh and entire country proud," said Purohit, who was the chief guest at the event.

"The way that the NID Foundation and Chandigarh University has been able to bring people together, celebrating the spirit of patriotism and paying tributes to those who made supreme sacrifice for the country's freedom, has been absolutely commendable. This is the first of its kind event in entire India and I congratulate them on the success of the event," said Purohit.

Asking people to get motivation from the 25000 citizens who attended the event, Purohit urged them to take a pledge on August 15 to dedicate themselves to the country and nation-building.

In her address, Smt Meenakshi Lekhi, Union Minister of State for External Affairs, and Culture said, "Thousands of our youth gathered here to form the waving image of our tricolour, there could not be a better view in the entire country than what we witnessed here today. Congratulations to the NID Foundation, Chandigarh University and most importantly the students, who made this dream of mine come true."

Thanking the union home ministry for allowing people to unfurl national flags, Lekhi said that she was overwhelmed by the respect people have in their hearts for the tricolour.

"On the 75th Independence Day, I appeal the people to resolve for an even better India, and pledge that they will contribute in every manner for the next flight of India to become the Vishwa Guru, in next 25 years," she said.

Speaking on the occasion, S. Satnam Singh Sandhu, Chief Patron, NID Foundation, and Chancellor, Chandigarh University congratulated all the participants and said that the historic formation of the national flag aptly celebrates the spirit of India's 75th Independence Day under the aegis of Azadi Ka Amrit Mahotsav.

"The Tricolour is a symbol of national pride for the entire country. To honour our national flag, the Government of India under the able leadership of Prime Minister Narendra Modi Ji is celebrating Azadi ka Amrit Mahotsav in all over the nation and has started the program of 'Har Ghar Tiranga' which envisages inspiring Indians everywhere to hoist the national flag at their home. This along with the intent to invoke the feeling of patriotism in the hearts of our people was the motive behind this initiative of NID Foundation and Chandigarh University," he said.

"Our national flag is more than the three colours, but is also a reflection of the pride of our past, our commitment to the present and our dreams of the future. Our tricolour is a symbol of India's unity, integrity and diversity. I am thankful to Chandigarh Administration for their unwavering support in achieving this historic feat," he added.

The joys and excitements of those in attendance knew no bounds as they breathed in patriotism. Sharing his thoughts about the event, Sunil Sharma, a student of Chandigarh University said that he was proud of the fact that his university organised such a significant event and made a world record. "I am proud that I am a part of this historic event, celebrating the independence of a land that has given us a unique identity and associated with proud heritage and values," he said.

"This is a day when we commemorate and pay homage to the courageous sacrifices of our freedom fighters, who fought hard with a worthy patriotic spirit to get their home free of British oppression. At 75 year of independence, it's very important that we continue to cherish and practise the same ideals and values our great countrymen held dear during their struggle to build an independent India," said Shahid, another student from the city.

The event concluded with flag hoisting and singing of the national anthem. The day-long event also witnessed cultural activities, and a ceremony to acknowledge and honour the gallant actions and sacrifices of freedom fighters and armed forces personnel. Awards were also conferred upon people for their exceptional achievements in the fields of arts, education, sports, medicine, public affairs, social service and literature.

With the active participation of thought leaders like Satnam Singh Sandhu, the NID Foundation is conceptualized and developed at the intersection of issues that are critical to building a New India and focuses on shared global responsibilities, ecological conservation, education, sustainability, and universal wellness. NID Foundation builds partnerships that bring together resources, expertise, and vision while working with the core actors of nation-building to identify issues, find solutions and drive change.