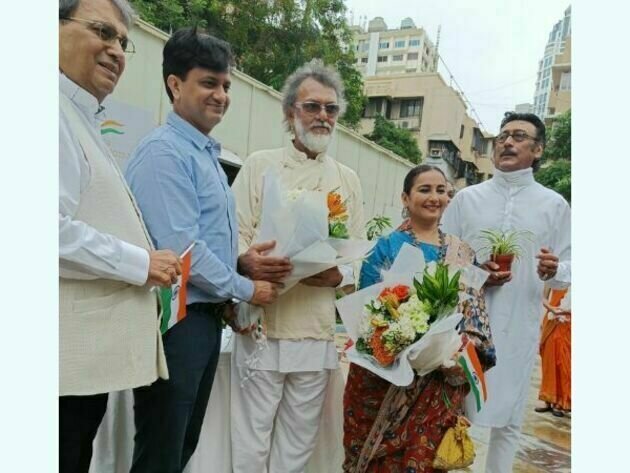 A free for all screening of the popular patriotic films Karma, Bhag Milkha Bhag and Shershaah was also organised for the public. This year the celebration marks the 75th year of India's independence with the country celebrating Azadi Ka Amrit Mahotsav, called upon by Hon'ble Prime Minister, Narendra Modi, with the Har Ghar Tiranga campaign.

National Museum of Indian Cinema (NMIC) is the first film museum in the country that chronicles 100 years of Indian cinema in the country, from its very first motion picture 'Raja Harishchandra' to the cinema in today's era, which is technically much advanced. It made the perfect venue to celebrate cinema and India's independence together on this special occasion.

It was a sight to see the representatives of Hindi Cinema hoisting the flag and singing the National Anthem in all its glory.

Talking to the media, MD, NFDC and CEO, CBFC, Ravinder Bhakar, said, "This year is special for all Indians in India and staying across the globe, as we commemorate the 75th year of our independence. Cinema is a very powerful medium and has played an important role in putting the country on a global map. I am happy that these esteemed personalities could take out time to celebrate this day with us. I look forward to many more enriching films in years to come."

"It is also a matter of pride to see so many people hoisting flags this year as part of the Har Ghar Tiranga campaign. Let's celebrate our country with the best version of ourselves, and India can be unstoppable in its growth and glory.", Bhakar added.

Talking about Karma, filmmaker Subhash Ghai said, "Cinema has that magic that can connect with the audiences, their heart and soul completely. Talking about patriotism in cinema, when it is a writer, he has to feel the emotions of patriotism, the director has to feel it, and the actors have to feel those emotions for their country. That's how you create magic."

"Those lines Har Karam Apna Karenge, Aye Watan Tere Liye... I think it was felt by everyone involved in the film, and hence audiences felt those emotions too." He added.

Rakeysh Omprakash Mehra spoke about Bhaag Milkha Bhaag. The filmmaker said, "Through Bhaag Milkha Bhaag, I wanted to tell a story around Partition and the price many lives had to pay for this independence that we celebrate today. I remember Milkha Singh saying meri saari nafrat Pakistan ke khilaf mit gayi, after he saw the film. That's the feeling the film was made for."

Divya Dutta speaking at the occasion, said, "I am absolutely fortunate to have been part of films that are about the country. I absolutely felt the pain of a sister while playing my character. It is magic that as actors, we are able to feel their emotions, their pain, their pride through those real-life characters that we play on screen."