Brand UNN.space announces its media launch with an Independence Day campaign glorifying the victories and technology of INS Vikrant 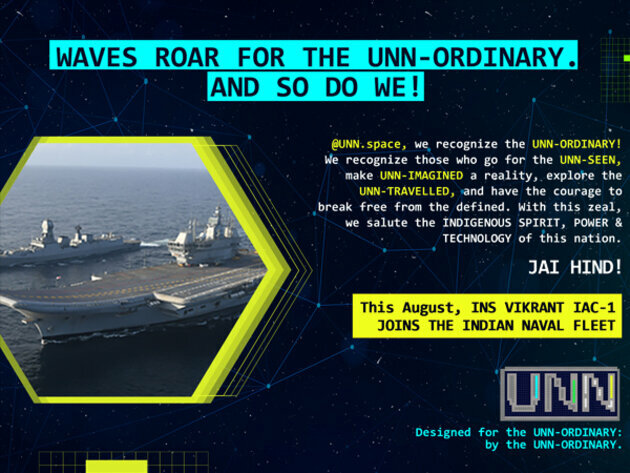 New Delhi [India], August 16 (ANI/SRV): The brand UNN.space announces its media presence with the launch of a highly energetic campaign, "Waves roar. Do you hear it!". The campaign portrays how waves roared for the victory of the nation during the 1971 Indo-Pak war with INS VIKRANT - R11's historic blockade in the east, air strikes, and evasion of Pakistani submarine PNS Ghazi. On the nation's 76th Independence Day, the campaign calls out to the audience for joining the roar of pride yet again, with the comeback of INS Vikrant IAC1, an indigenously built aircraft carrier warship.

A weeklong campaign launched on August 7 glorified the saga of INS Vikrant in three phases; with the conclusion timed for the Independence Day celebration:

Drawing from the occasion, the brand declares that its core purpose is to recognize young genius minds with courage and lateral thinking abilities; to sensitize them to own up to their power for bringing alive the impossible, break-free from the stereotyped definitions of success or life and venture out towards the newer dimensions of unexplored realities; with the power of science and technology.

The UK-based, Indian-origin brand derives its name "UNN" from the other side of life, that's unexplored, unseen & unheard. It is there to draw attention to do what's not yet done; differentiate the genius minds with superior abilities and call them the "UNN-ORDINARY". Abandoning the concept of FOMO (fear of missing out), the brand boosts young minds to now go for POSO (a passion for standing out).

Continuing the mystery of product range, the marketing head, Urshita Nema (Co-founder, Uspire Group) adds to the excitement with her quote, "We are curating products meant exclusively for the UNN-ORDINARY. Here, we go deeper, and our product designers work with experts from the fields of astronomy, geology, deep-sea, archaeology, ace physicists, and world-class trekkers, divers and expeditions to arrive at what defines the UNN-ORDINARY." The exclusive product range is planned to hit the market this year, just ahead of the festive season, around October 2022. The DTC website shall host the consumers on the website www.unn.space

Continuing with the conversation around the identity of the brand, Urshita says, "We are proud to launch the world's first "sci-style brand" and here "sci" stands for all the excitement that lies undiscovered and is calling the UNN-ORDINARY towards the path of exploration in the dimensions of space, life & mystery". She emphasizes on the exclusivity of the brand as "Designed for the UNN-ORDINARY; by the UNN-ORDINARY".