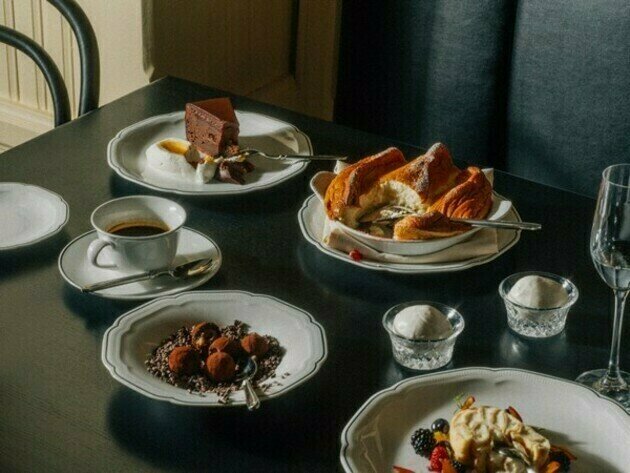 The name of the restaurant refers to Koloman Moser, who was among the foremost artists of the Vienna Secession movement, and a co-founder of the Wiener Werkstatte, which had a profound impact on twentieth century design and cultural life in Europe. Rishiv Khattar worked on the concept along with Chef Markus Glocker and they were both inspired by Viennese secessionist designs and wanted to echo the spirit of turn of the century European cafes, which were vibrant meeting points for food, community, and ideas.

Restaurateur Rohit Khattar, Founder Chairman EHV/Old World Hospitality, says, "We are excited to announce the opening of Koloman - our second restaurant in New York after Indian Accent. We are grateful to the owners, G.F.I. Hospitality, who invited us to reinterpret a unique space in our own special way where Chef Markus Glocker will blend Parisian creativity with Viennese tradition in his cuisine."

Markus Glocker, Executive Chef-Partner in Flatiron Hospitality, says, "I am so thrilled about collaborating with Rohit Khattar and the EHV team. Together, we look forward to bringing a dazzling and elegant experience in the form of Koloman."

While the Executive Chef/Owner at Batard, Glocker earned a three-star rating from The New York Times, and a Michelin star. In 2015, Batard was awarded Best New Restaurant in America by the James Beard Foundation.

The restaurant will be led by veteran GM, Richard Sanchez (Red Eye Grill, Palm Steakhouse). Katja Scharnagl, Koloman's Beverage Director, was the Chef Sommelier at Le Bernardin and her wine list will have a real sense of place, history, passion and sustainability. EHV's Operations Director Nitin Mathur is overseeing the launch.

The relaxed European restaurant takes its inspiration from the Secessionist era designers of the Wiener Werkstatte, with high impact off-black and cream tile, hand painted patterns for surfaces, graphic wallpapers, and bold black iron work. The design is the first New York City project by Russell Sage Studio, the prolific London-based design firm who had earlier collaborated with Rishiv Khattar when he created Comorin, Gurugram for EHV.

The restaurant's atmosphere is relaxed and friendly, a welcoming space for both everyday dining and special occasions. The thoughtful tabletop is refined and elegant: delicate, fine etched glassware, old school butter cloches, coppers for sauces, as well as coffee and cake service in the grand European cafe style. The restaurant will initially open for dinner only. Breakfast and lunch service will follow in mid fall.

23 ℃
Light Rain with Thunder in Seletar

FORT MYERS, Florida: Areas within Lee County, including Sanibel Island and Fort Myers, Florida, were devastated by winds, rains and ...

Survey reports 66% of US adults say no to Covid boosters

US to purchase $1.1 billion in arms for Ukraine

WASHINGTON D.C.: Pentagon officials have announced that an arms package has been approved for Ukraine worth $1.1 billion, which includes ...

Britain has 'too many' low-skilled migrants, interior minister says

SYDNEY, NSW, Australia - Stocks in Asia moved sharply higher on Tuesday despite markets in Hong Kong and Shanghai being ...