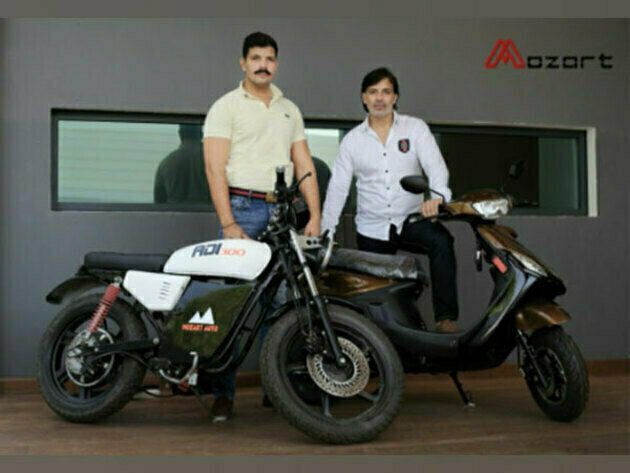 New Delhi [India], October 3 (ANI/GPRC): Two-wheelers and three-wheelers are currently ruling the Indian EV space, as they are most affordable, compared to electric cars. In the two-wheeler market, electric scooters have been able to penetrate to some extent, thanks to the start-ups and some big names has entered the domain. However, the motorcycle segment is still ruled by conventional fuel-powered models.

With a new, sleek logo which features a compilation of two upward triangles showcasing an uppercase letter 'M' in red.

The new logo, designed in-house focuses on the acceptance for masses and also underlines the value of saving the environment providing with an inflection in the field of electric Vehicles.

Mozart Automobile is also venturing into the segment with its e-bike ADI 300 which is the first ever made in India.

The Indian electric two-wheeler market is expected to cross 20 lakh units by 2025. While the zero-emission scooters will certainly a major role in that growth story, ADI 300 electric bike have the potential to play key parts with its speed of 120 kmph and of range of 250 km.

The bike is supremely stylish with a sleek look and is expected to be launched in the coming month.

As per Mozart Automobile, it will be launched by Diwali, 2022 and is expected to be on road in November 2022.

ADI 300 is reportedly powered by a 72Ah lithium-ion battery and can be charged to 80 per cent within an hour. It is reported to be powered by a motor which is capable of producing of torque and a top speed of 120 kmph. The range of the bike is claimed to be 250 km on a single charge.

As it appears, the bike is designed to cater to the masses and to even provide for an economical and accessible electric bike in order to provide a better, valuable, approachable and inexpensive first-of-a-kind Electric Bike in the market of Electric Vehicles.

Also, there are a host of new models waiting to be introduced to the Indian market by Mozart Automobiles in 2022 and ahead, including fully-faired to naked, long-range to high-speed.

Mozart Automobile has also launched the new model of electric scooter Mozart MM Pro at around the end of September designed exclusively, made in India bike with an approach which will help the brand uplift its value furthermore with adding to the environment-friendly group and also adding a layer to India's approach in Ev sector and make in India as well. The scooter is available in vibrant colors of blue, black-brown, green, orange, yellow, red and others and its price is just Rs.49999.

This story is provided by GPRC. ANI will not be responsible in any way for the content of this article. (ANI/GPRC)

WASHINGTON, D.C.: According to a Pentagon report, if China continues with its current nuclear buildup pace, it could have a ...

William, Kate plan US trip in bid to tamp down royal controversies

LONDON, England: Prince William and his wife Kate, the new Prince and Princess of Wales, will travel to the U.S. ...

SYDNEY, Australia: For the first time in eight years, Australia lowered its terrorism threat level from "probable" to "possible," due ...

TRENTON, New Jersey: As part of a project to prevent major wildfires in a federally protected New Jersey forest, up ...

VIENNA, Austria: During a 24-hour strike by Austrian rail workers held this week over issues related to pay, rail traffic ...

ATLANTA, Georgia: As companies look to rein in costs and trim their headcount to brace for an economic slowdown, CNN's ...