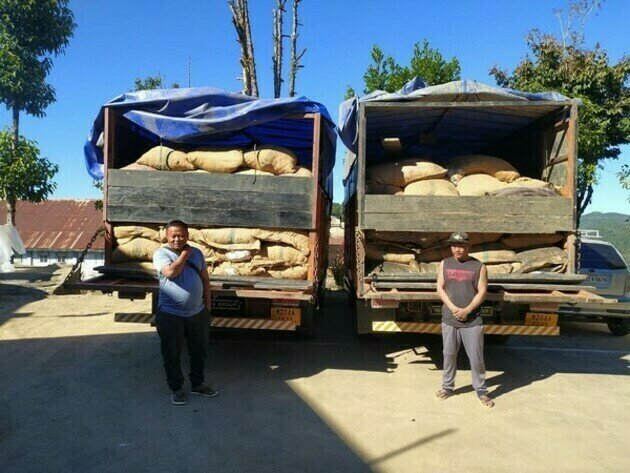 Khawzawl (Mizoram) [New Delhi], November 24 (ANI): In yet another seizure of areca nuts being smuggled from Myanmar, the police in India's northeast Mizoram state on Wednesday confiscated two trucks and seized over 12,000 kilograms smuggled areca nuts in Khawzawl district, the police said on Thursday.

Both the truck drivers have been arrested, they added.

The areca nuts were being illegally transported in two trucks, which were driven by T. Lalrochanga and Liansiampianga, both residents of New Champhai at Tuisenphai near Khawzawl, they added.

The seized items along with vehicles were handed over to Custom Preventive Force, Champhai for further necessary legal action, they added.

The latest seizure is not an isolated one. On November 22, Mizoram police seized 3500 kg of smuggled dry areca nuts, which were being illegally transported by one 16-wheeler Truck proceeding towards Assam, driven by Sahanul Abedin Talukdar (29) of Brahmangram, Kalain, Cachar district of Assam. Police also arrested the driver and confiscated the truck.

Areca nuts are being smuggled from Myanmar to India for long. Six Mizoram districts - Champhai, Siaha, Lawngtlai, Serchhip, Hnahthial and Saitual- share about 510-km long international border with Myanmar. This border is being used for smuggling areca nuts - also know as betel nuts - from Myanmar to India. (ANI)

US: reject cable to Cuba to connect voice, internet

WASHINGTON D.C.: A U.S. government committee has urged the Federal Communications Commission (FCC) to deny an application to connect Cuba ...

LONDON, England: Richard Griffiths, chief executive of the British Poultry Council, said nearly half of all turkeys and geese in ...

The country has been gripped by violent protests after the death of a woman who allegedly wore an "improper" hijab ...

AUSTIN, Texas: Elon Musk has said that he expects a wireless brain chip developed by his company, Neuralink, to begin ...

In major break from past, Egypt to build 21 desalination plants

CAIRO, Egypt: Ayman Soliman, CEO of Egypt's Sovereign Fund, said as part of the first $3 billion phase of a ...

WASHINGTON D.C.: According to trial data contained in a report presented this week, an experimental Alzheimer's drug from Eisai and ...

2022 will see historic high farm incomes in US

WASHINGTON D.C.: The U.S. Department of Agriculture reported that as producers are benefitting from high global grain and oilseed demand ...

NEW YORK CITY, New York: Pfizer is set to invest more than $2.5 billion in its drug manufacturing operations in ...

NEW YORK CITY, New York: The infant formula shortage that has persisted in the U.S. for nearly a year, is ...