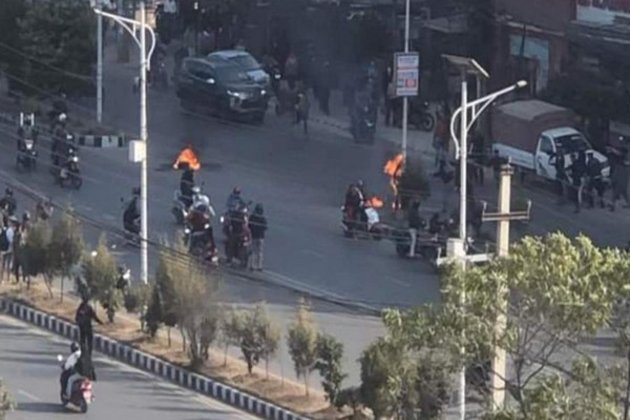 Kathmandu [Nepal], January 25 (ANI): A 37-year-old man who had set himself on fire in front of Nepal's Parliament a day ago has succumbed to his burn injuries, doctors from the hospital where he was being treated confirmed on Wednesday.

Identified as Prem Prasad Acharya, the businessman from Illam District had poured diesel on himself and set himself on fire as the country's newly elected Prime Minister Pushpa Kamal Dahal's cavalcade was coming out of the parliament on Tuesday afternoon.

"He succumbed to the burn-inflicted injuries. He had suffered 80 percent burns," Dr Kiran Nakarmi from the hospital confirmed to ANI over the phone.

A video that has been circulating on social media in Nepal showed bystanders attempting to douse the blaze after the man set himself on fire. After the flames were put out the man was rushed to the Skin Burn Hospital in Kirtipur.

Prem Prasad Acharya had taken to his social media accounts to post about the financial and mental breakdown he had been facing for years. The lengthy post in which he spoke about his intention to end his life has been shared widely on social media.

The businessman stated that conditions were always unfavorable for him which prompted him to take the extreme step. He also mentioned how he had made multiple attempts previously as well but failed. The government hasn't responded to the incident.

The government has not made any statement in connection with the incident.

On social media, several users questioned Prime Minister's silence on the incident, which happened in front of him. (ANI)

US ending Covid emergency programs on May 11

WASHINGTON D.C.: The Biden administration said this week that it will end US COVID-19 emergency declarations on 11th May, nearly ...

After 11,000 US flights disrupted, FAA updates its computers

WASHINGTON D.C.: In a letter to lawmakers last week, the US Federal Aviation Administration (FAA) said it had put in ...

WASHINGTON D.C.: The Biden administration has stopped issuing export licenses to US companies seeking to ship most items to China's ...

Nearly a year in, the war in Ukraine has cost tens of thousands of lives and brought the world to ...

After Biden tapped US oil reserves, House passes bill to end such uses

WASHINGTON D.C.: The US House of Representatives has passed a bill that limits the ability of US Energy Secretary Jennifer ...

BOSTON, Massachusetts: Russian businessman Vladislav Klyushin, who has ties to the Kremlin, has been accused of making tens of millions ...

SANTA CLARA, California: One week after Intel forecasted lower-than-expected sales caused by a loss of market share to rivals and ...

WASHINGTON D.C.: As part of a wider policy drive to increase competition in consumer markets, President Joe Biden has announced ...

OSLO, Norway: Ending a three-year run of profits as stock and bond prices were hit by rising inflation and Russia's ...

US concerned over rights at Mexico auto factory, seeks corrections

WASHINGTON D.C.: The US has again asked Mexico to investigate claims that workers at an auto parts facility of American ...

WASHINGTON D.C.: Tesla confirmed this week that the US Justice Department has requested documents related to its Full Self-Driving and ...